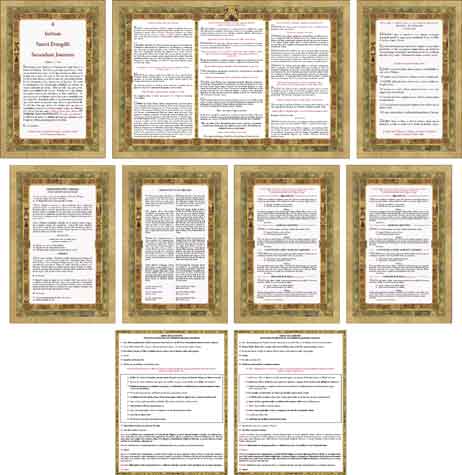 Hello everyone. I would just like to take a moment to announce the release of our latest graphic designs of Mass Cards for priests and ministers. Nearly two years ago, we were contacted by a Roman Catholic priest from Braga, Portugal to consider designing a set of altar cards for him to celebrate the Roman Catholic Mass according to the Braga Rite. We were thrilled to design them for him. They are  now listed for sale on our business website, Myriad Creative Concepts for others to purchase as well if you are interested.

It took nearly two years to design them because there were several cards to create with specific prayers that not only had to be accurate, but had to be presented exactly right too. Our customer is a very busy priest like all priests are and he could only proof the drafts sent to him when he had some free time to tackle them

We were asked to design artwork for these cards that incorporated ancient Celtic art because many Celts settled into northern Portugal. The "Book of Kells" has many beautiful manuscripts full of beautiful Celtic art and it was suggested that we first look there for ideas. The Book of Kells proved to be a virtual treasure trove of images to pull from to create a hybridization of art suitable in the graphic design of these altar cards. He was thrilled with what we came up with and we hope that you are too.

There are several cards used in the Braga Rite. As we designed draft after draft of each card, our customer meticulously proofread each one until they were absolutely perfect for him. The layout of the prayers is just right, the font complements the art, and the type is crisp and very easy to read.

If we had made these by hand, we would have had to charge him thousands of dollars to make them. But, thanks to modern graphic design software, we were able to create them very inexpensively. This has been one of the most enjoyable experiences that we have had so far designing for priests and ministers.

A complete set of Roman Catholic Altar Cards for the Braga Rite can be found for sale on our website on our Latin Mass Altar Cards Kits page. They are available laminated or as prints to be framed by your local framer. By request, we can professionally frame them for you. Contact us for details.

Thanks for stopping by today. Have a wonderful week!